The OpenGL API is designed to maximize graphics performance. It is not designed for ease of debugging. When a developer works on top of OpenGL, he sees the graphics system as a "black box;" the program issues thousands of API calls into it and "magically" an image comes out of the system. But, what happens when something goes wrong? How does the developer locate the OpenGL calls that caused the problem?

In this article we will demonstrate how gDEBugger transforms OpenGL application debugging tasks from a black box model to a white box model, letting the developer peer into OpenGL to see how individual OpenGL commands affect the graphics system.

For example, if a program renders an object, but it does not appear in the rendered image, the developer can break the debugged application run when the relevant object is being rendered and watch the related OpenGL state variable values (GL_MODELVIEW_MATRIX, GL_PROJECTION_MATRIX, GL_VIEWPORT, etc.). After locating the state variable values that appear to cause the problem, the developer can put API breakpoints on their access functions (glRotatef, glTranslatef, glMultMatrixf, etc.) and use the Call Stack and Source Code views to locate the scenario that led to the wrong state variable value assignment. 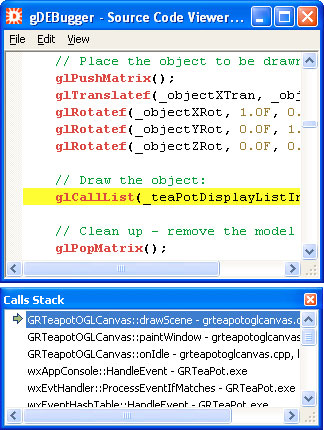 Some OpenGL mechanisms use more than just a few OpenGL state variables. For debugging these mechanisms, gDEBugger offers a State Variables Comparison Viewer. This viewer allows a developer to compare the current state variable values to either: 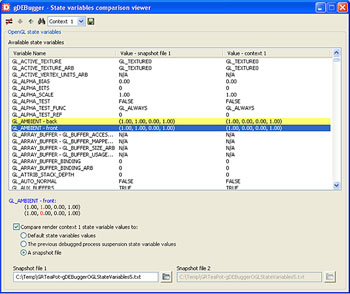 If, for example, the game does not have a mode in which the character is rendered fine, the developer can:

Displaying only the state variable values that were changed by the game application helps the developer track the cause of the problem.

gDEBugger's Textures Viewer allows viewing a rendering contexts' texture objects, their parameters and the texture's loaded data as an image. Bound textures and active textures (those whose bind targets are enabled) are marked. This helps the developer to pinpoint texture related problems quickly and easily. 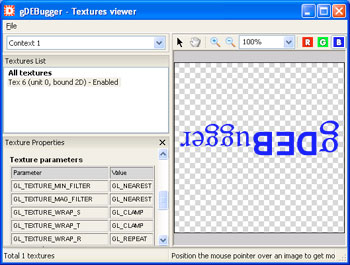 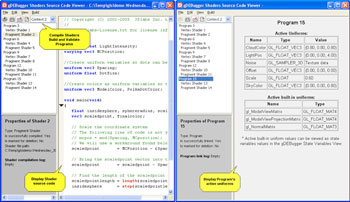 We hope this article demonstrated how gDEBugger transforms the OpenGL debugging task to a white box model, minimizing the time required for finding those "hard to catch" OpenGL-related bugs and improving your program's quality and robustness.

Editor's Note: You'll remember from our first edition that Graphic Remedy and the ARB have teamed up to make gDEBugger available free to non-commercial users for a limited time.