"The object of the superior man is truth" -- Confucius

The OpenGL Longs Peak object model is substantially defined now, and we have a good notion of what a Longs Peak program will look like at a high level. Many smaller details are still being filled in, but after reading this article you should understand Longs Peak in considerable detail. For a background refresher, refer to "The New Object Model" in OpenGL Pipeline Volume 002, and "Using the Longs Peak Object Model" in OpenGL Pipeline Volume 003.

What's In A Namespace? Or, a GL by any other prefix would smell as sweet.

An important decision is that the OpenGL Longs Peak API will exist in a new namespace. Originally we thought Longs Peak could continue to use "gl" prefixed functions, "GL" prefixed types, and "GL_" prefixed tokens, but as we wrote up object specifications, we realized there were too many collisions. For example, both OpenGL 2.1 and Longs Peak have a Map Buffer entry point, but they take different parameters. We haven't chosen the namespace prefix yet; it's a marketing and branding issue, not a technical issue. As a placeholder until that's decided, we're using "lp" as the prefix.

"A mental act is cognitive only in the sense that it takes place in reference to some object, which is said to be known" -- Samuel Alexander

The objects defined in Longs Peak fall into several different categories depending on their behavior and semantics. In a true object-oriented language binding of the API, these categories would be abstract classes from which the concrete classes inherit behavior. Since our C API doesn't support inheritance, the categories are useful primarily as a conceptual tool for understanding the API. In any event, the categories are as follows:

"An object is not first imagined or thought about and then expected or willed, but in being actively expected it is imagined as future and in being willed it is thought" -- Samuel Alexander

Each of the concrete object classes mentioned above is explained in somewhat more detail here. The descriptions are organized according to the dependencies of the object graph, to avoid backwards references.

Format Objects fully resolve data formats that will be used in creating other types of objects. Such an object's defined usage must either match or be a subset of the usage supported by its format object. Format objects are a powerful generalization of the internal format parameter used in specifying texture and pixel images in OpenGL 2.1. In addition to the raw data format, format objects include:

Buffer Objects replace vertex arrays and pixel buffers, texture images, and render buffers from OpenGL 2.1. There are two types of buffer objects. Unformatted buffers are used to contain vertex data (whose format and interpretation may change depending on the vertex buffer object they're bound to) or uniform blocks used by shaders. Images are formatted buffers with a size, shape (dimensionality), and format object attachment. Changing buffer contents is done with APIs to load data (lpBufferData and lpImageData[123]D) and to map buffers in and out of client memory with several options allowing considerable flexibility in usage. See the article "Longs Peak Update: Buffer Object Improvements" earlier in this issue for more details.

Shader Objects are a (typically compiled) representation of part or all of a shader program, defined using a program string. A shader object may represent part or all of a stage, such as vertex or fragment, of the graphics pipeline.

Program Objects are container objects which link together one or more shader objects and associate them with a set of images, texture filters, and uniform buffers to fully define one or more stages in the programmable graphics pipeline. There is no incremental relinking; if a shader needs to be changed, simply create a new program object.

Frame buffer Objects are containers which combine one or more images to represent a complete rendering target. Like FBOs in OpenGL 2.1, they contain multiple color attachments, as well as depth and stencil attachments. When image objects are attached to an FBO, a single 2D image must be selected for attachment. For example, a 3D mipmap could have a particular mipmap level and Z offset slice selected, and the resulting 2D image attached as a color attachment. Similarly, a specific cubemap face could be selected and attached as a combined depth/stencil attachment. Each attachment point has an associated format object for determining image compatibility. When an image is bound to an FBO attachment, the format object used to create the image and the format object associated with the attachment point must be the same format object or validation fails. This somewhat draconian constraint greatly simplifies and speeds validation.

Vertex Array Objects are containers which encapsulate a complete set of vertex buffers together with the interpretation (stride, type, etc.) placed on each of those buffers. Geometry is represented in Longs Peak with VAOs, and unlike OpenGL 2.1, VAOs are entirely server state. That means no separate client arrays or enables! It also becomes very efficient to switch sets of vertex buffers in and out, since only a single VAO need be bound -- in contrast to the many independent arrays, and their interpretation, that have to be set in OpenGL 2.1 when switching VAOs. (The vendor extension GL_APPLE_vertex_array_object provides similar efficiency today, but is only available in Apple's implementation of OpenGL.)

Sync Objects are semaphores which may be set, polled, or waited upon by the client, and are used to coordinate operations between the Longs Peak server and all of the application threads associated with Longs Peak contexts in the same share group. Two subclasses of sync objects exist to date. Fence Syncs associate their semaphore with completion of a particular command (set with lpFence) by the graphics hardware, and are used to indicate completion of rendering to a texture, completion of object creation, and other such events. Query Syncs start a region with lpBeginQuery, and keep count of fragments rendered within that region. After lpEndQuery is called to end the query region, the semaphore is signaled once the final fragment count is available within the query object. In the future we will probably define other types of syncs associated with specific hardware events -- an example would be a sync associated with monitor vertical retrace -- as well as ways to convert syncs into equivalent platform-specific synchronization primitives, such as Windows events or pthreads semaphores.

The remaining objects making up Longs Peak are still being precisely defined. They are likely to include: display list objects, which capture the vertex data resulting from a draw call for later reuse; per-sample operation objects, which capture the remaining fixed-functionality state used for scissor test, stencil test, depth test, blending, and so on; and perhaps a "miscellaneous state" object containing remaining bits of state that don't have an obvious better home, such as edge flag enables, point and line smooth enables, polygon offset parameters, and point size.

Just as in OpenGL 2.1, the Longs Peak graphics context encapsulates the current state of the graphics pipeline. Unlike OpenGL 2.1, most context state is encapsulated in attributes of server objects. A small number of objects are required to define the pipeline state. These objects are bound to the context (see figure 1); changing a binding to refer to another object updates the graphics hardware state to be consistent with that object's attributes.

Changing state by binding objects can be very efficient compared to the OpenGL 2.1 model, since we are changing large groups of state in one operation, and much of that state may have already been pre-validated while constructing the object being bound. This approach will also be useful for applications and middleware layers performing complex state management. It is both more general and more powerful than either the glPushAttrib/glPopAttrib commands or encapsulating state changes in GL display lists, which are the only ways to change large groups of state in one operation today. 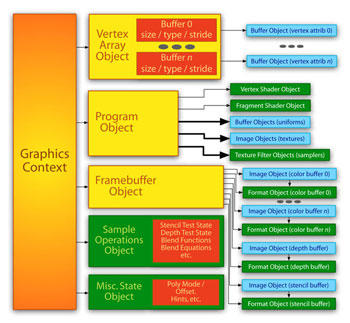 Figure 1: Graphics Context Bindings. The Longs Peak context contains bindings for geometry (a vertex array object), programs (a program object), a rendering target (framebuffer object), sample operations state, and remaining fixed-functionality state affecting rasterization, hints and other miscellaneous state. In this diagram, yellow objects are containers, green objects are state objects, blue objects are data objects, red blocks represent attributes of container and state objects, and arrows represent attachments to objects or bindings to the context. The context itself, while not strictly speaking an object, is shown in yellow-red to indicate that it takes on aspects of a container object. View Closeup

Once all required objects are bound to the context, we can draw geometry. The drawing call looks very much like the OpenGL 2.1 glDrawArrays, but combines multiple draw array and primitive instancing parameters into a single call:

A similar variation of glDrawElements is also provided:

The drawing calls are among the small number of Longs Peak entry points that do not take an object as an argument, since all the objects they use are already bound to the graphics context.

Finally, we've reached the point of outlining a Longs Peak sample program. The outline is not intended to be detailed source code, just to give a sense of the steps that will need to be taken to fully define the objects required for rendering. While this initialization looks complex, most of it is simple "boilerplate" code that can readily be encapsulated in utility libraries or middleware such as GLUT. It is also likely that at least some of the required objects can be predefined by the driver; for example, if the application is rendering to a window-system provided drawable, then a "default framebuffer object" will be provided.

While we still have a lot of work to do, and the final details may differ slightly, the ARB has now defined the overall structure of the Longs Peak API and the organization and definition of the object classes in the API. We'll continue to show you details of Longs Peak in future issues of OpenGL Pipeline, and when Longs Peak is released, we’ll expand these articles into a tutorial and sample code in the ARB's online SDK.

(Subtitles in this article are thanks to the late-night availability of Google and www.brainyquote.com)