The Khronos OpenGL ARB Working Group has received requests for clarification concerning the performance of OpenGL on Windows Vista. These questions are understandable as Microsoft has dramatically changed the user experience with the Windows Aero compositing desktop and introduced a completely new display driver architecture. This article will discuss how these changes affect OpenGL.

Hardware-accelerated OpenGL is fully supported on Windows Vista with the Windows Aero compositing desktop user experience - just as with Direct3D.

Figure 1 shows the path through which OpenGL and Direct3D applications render their output under Windows Vista. Firstly, the OpenGL or Direct3D user-mode graphics drivers take the data from the application and use the graphics hardware to render one frame of content. That frame is then presented to the Desktop Window Manager (DWM) which composites the frame into the desktop using GPU acceleration. The DWM provides the desktop compositing functionality used by the Windows Aero and Windows Standard user experiences in Windows Vista.

The DWM is a key element of the Windows Vista user experience and one of its main functions is to manage the presentation of the Windows desktop by compositing the outputs of multiple applications to the screen. As a complete 3D application in its own right, the DWM uses GPU memory and resources and places an additional load on the GPU, which impacts application graphics performance by approximately 10% for typical applications. End users should weigh the benefits of the DWM and the Windows Aero user interface against this performance cost. An easy way to experiment with a particular application is to disable the DWM, by selecting the Windows Classic or Windows Basic user interface style.

During full-screen applications, such as games, the DWM is not performing window compositing and therefore performance will not appreciably decrease. 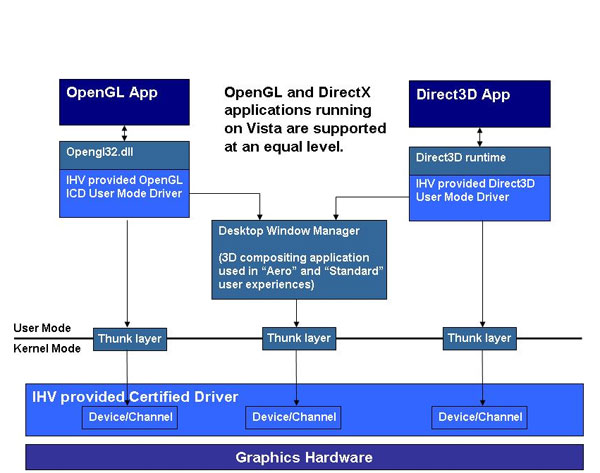 The new Windows Display Driver Model (WDDM) in Windows Vista provides a firewall and the thunk layer (that handles communication between the graphics hardware/kernel mode graphics driver and the user-mode graphics driver) to increase overall system stability. This architecture differs from Windows XP, where the OpenGL ICD talked directly to the GPU hardware and handled many low-level functions, including memory management.

Some have suggested that OpenGL performance on Windows Vista is poor compared to Windows XP. This is not the case.

A comparison between the performance on Windows XP and Windows Vista of the SPECviewperf professional OpenGL benchmark, two OpenGL game benchmarks, and two Direct3D game benchmarks are presented below. 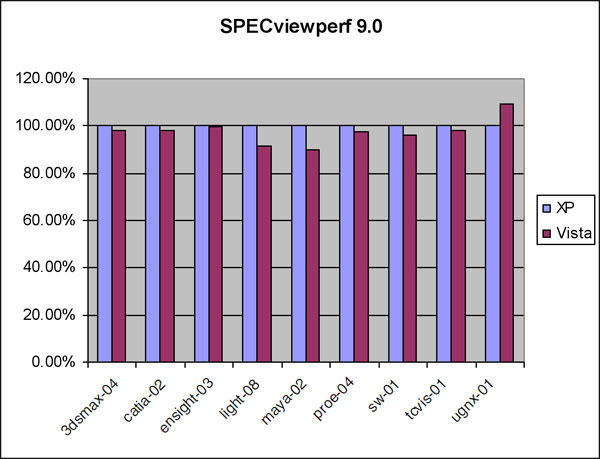 If DWM were enabled through enabling Windows Aero - performance would drop by about 10%. For many users this tradeoff is worthwhile in order to use the more advanced user interface.

The Doom3 (demo1) and Prey (move.demo) figures below show that Windows Vista performance for full-screen OpenGL games is comparable to the performance delivered on Windows XP. As these applications are full screen, DWM is not active and there is no performance drop in Windows Aero. 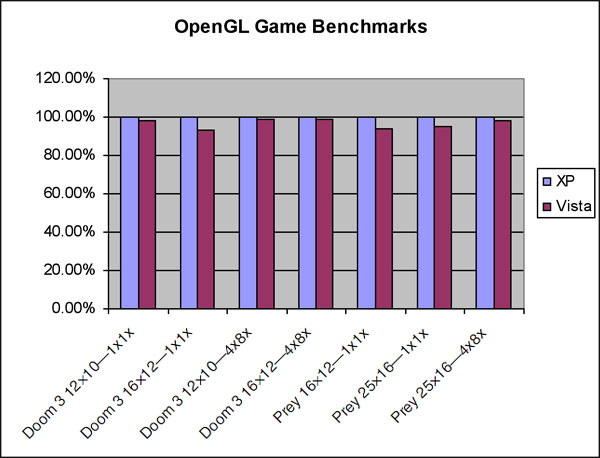 The diagram below shows how the Direct3D games Half Life 2 Episode One (demo1) and Oblivion (Outdoor, HDR off) perform on Windows XP and Windows Vista. These numbers were obtained on the same system and same driver versions as the OpenGL benchmarks. In all cases the benchmarks were run in full-screen mode.

These figures show that Windows Vista performance for full-screen Direct3D games is comparable to the performance delivered on Windows XP • just as for OpenGL. As these applications are full screen, DWM is not active and there is no performance drop in Windows Aero.

These results confirm that both Direct3D and OpenGL are excellent 3D APIs for Windows Vista. 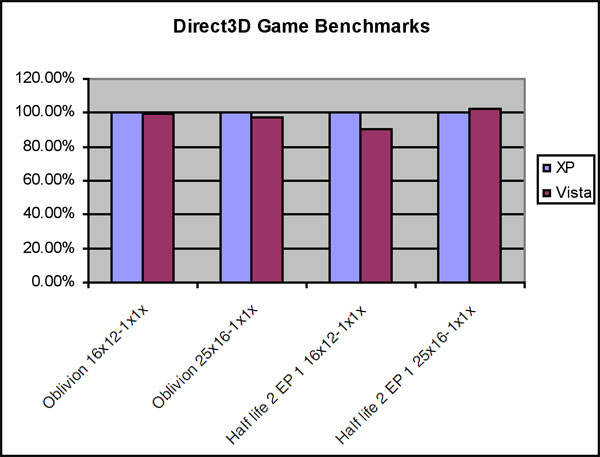 OpenGL is fully integrated into the Windows Vista display architecture just like Direct3D -both interfaces are first-class graphics API citizens. OpenGL hardware acceleration is available on Windows Vista through highly optimized drivers provided by the graphics hardware vendor just as on Windows XP. OpenGL applications can benefit from the improved resource management provided by Windows Vista. OpenGL performance on Windows Vista is extremely competitive compared to Windows XP and will rapidly improve as support for this new operating system matures. The enhanced Windows Aero user interface can decrease graphics intensive application performance by about 10% but this performance drop can be eliminated by selecting Windows Classic or Windows Basic user interface style or using full-screen applications. To ensure maximum performance and stability on Windows Vista, users should regularly check for driver upgrades from their graphics hardware supplier.

The third edition of the OpenGL Pipeline Newsletter, an OpenGL ARB publication, has included an article written by NVIDIA for software developers with tips to get the maximum out of their OpenGL application on Windows Vista. This article can be found here: http://www.opengl.org/pipeline/article/vol003_7/

For questions about this article, or about OpenGL in general, please contact Barthold Lichtenbelt at blichtenbelt@nvidia.com, Khronos OpenGL ARB Working Group chair.

General overview “What is Aero”

Overview of how DX9, DX10, GDI, OpenGL and the DWM are architected under the WDDM