Table of Contents
Previous article: GLSL: Center or Centroid?  (Or When Shaders Attack!)
Next article: Optimize Your Application Performance

So Windows Vista is here, but what does it mean for an OpenGL user and developer? In this article we will try to give OpenGL application developers a quick peek at what to expect and the current state of OpenGL on Windows Vista.

Just like Windows XP, Windows Vista does not contain an OpenGL ICD "in the box." End users will need to install drivers from OEMs or video hardware manufacturers in order to access native hardware-accelerated OpenGL. These drivers can be found on the Web sites of most hardware manufacturers.

The two biggest changes that Windows Vista brings to OpenGL are:

OpenGL and Direct3D are treated the same by Windows Vista, resulting in full integration into the OS for both APIs. For example, both Direct3D and OpenGL will get transparency and dynamic thumbnails when Windows Aero is on, and all the WDDM features (video memory virtualization, etc.) will work in a similar fashion.

Under WDDM, Microsoft takes ownership of the virtualization of video resources at the video memory level, but also at the graphics engine level. In short, this means that multiple simultaneous graphics applications can be running in round robin as scheduled by Windows Vista's Video Scheduler and their working sets (video resources) will be paged in, as needed, by Windows Vista's Video Memory Manager.

Being that the video hardware is virtualized, user-mode components (the OpenGL ICD is one of those) no longer have direct access to that hardware, and need a kernel transition in order to program registers, submit command buffers, or know the real addresses of the video resources in memory.

Graphics applications now have to share resources with the 3D-accelerated window manager. Each OpenGL window now requires an offscreen frontbuffer, because there's no longer direct access to the surface being displayed: the desktop. This is also true when the Desktop Windows Manager (DWM) is off.

In order for Windows Vista to perform compositing, DWM allocates an extra window-sized compositing buffer for each top-level window in the system. All these resources add up and increase the video memory footprint.

GDI is no longer hardware-accelerated, but instead rendered to system memory using the CPU. That rendering is later composed on a 3D surface in order to be shown on the desktop. The graphics hardware video driver is no longer involved in GDI rendering, which means that mixing GDI and accelerated 3D rendering in the same window is likely to produce corruption like stale or blanked 3D rendering, trails, etc. Using Microsoft's OpenGL software rendering (the first item in the four OpenGL implementations) will achieve GDI compatibility, but at the expense of rendering speed and lack of modern features. 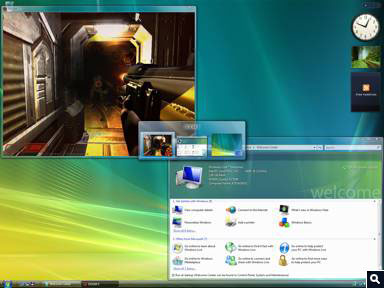 What All This Means for the OpenGL ICD User

Software application companies are preparing new versions of their OpenGL applications to take advantage of the new features and fix the possible incompatibilities that Windows Vista may have introduced.

Will My Applications Run Fast?

Performance-wise, developers can expect a decrease of around 10-15% on Windows as compared to Windows XP. Applications that use problematic cases (for example, excessive flushing, or rendering to the frontbuffer, as explained later) can see a larger performance degradation. However, expect this gap to become smaller over time while the graphics hardware vendors work on further optimizing their Windows Vista WDDM drivers.

WDDM's increased memory footprint and new video memory manager approach may worsen resource-hungry scenarios. Applications which were already pushing the limits of memory consumption on Windows XP, just barely fitting, may fall off a performance cliff on Windows Vista. This is due to excessive thrashing because available system and/or video memory is now exhausted.

What All This Means for the OpenGL Developer

GDI usage over 3D accelerated regions is incompatible with Windows Aero, so developers have two options:

Windows Vista introduces the new pixelformat flag PFD_SUPPORT_COMPOSITION (defined in the Driver Development Kit's wingdi.h as 0x00008000). Creating an OpenGL context for a pixelformat without this flag will disable composition for the duration of the process which created the context. The flag is mutually exclusive with PFD_SUPPORT_GDI.

If a developer must use GDI on top of an OpenGL context, use the following rules:

On the other hand, if a developer wants to have Windows Aero enabled with a windowed OpenGL application, use the following rules to verify that you are not inadvertently trying to mix GDI over OpenGL:

Performance notes and other recommended practices

If an application renders to the frontbuffer, remember to call glFinish or glFlush whenever it needs the contents to be made visible on the screen. For the same reason, do not call those two functions too frequently, as they will incur the penalty of copying the contents of the offscreen frontbuffer to the desktop.

Calling synchronization routines like glFlush, glFinish, SwapBuffers, or glReadPixels (or any command buffer submission in general) now incurs a kernel transition, so use them wisely and sparingly.

Given that under WDDM the OpenGL ICD relinquishes control over the desktop, fullscreen mode is now achieved by the driver in a similar way to Direct3D's exclusive mode. For that reason do not try to use GDI features on a fullscreen application (e.g. large GDI cursors, doing readbacks via GetDC/BitBlt), as they refer to the desktop which resides in a completely different piece of memory than the 3D rendering.

If the application performs extremely GPU intensive and lengthy operations, for example rendering hundreds of fullscreen quads using a complex pixel shader all in a single glDrawElements call, in order to avoid exceeding the 2 second timeout and having an application being killed by Windows Vista's Timeout Detection and Recovery, split the call into chunks and call glFlush/glFinish between them. The driver may be able to split long chunks of work for the application, but there will always be corner cases it cannot control, so don't rely solely on the driver to keep rendering from exceeding the two second limit. Instead, anticipate these cases in your application and consider throttling the most intense rendering loads yourself.

Under Windows Vista, the notion of "available video memory" has even less significance than under Windows XP, given that first it is hard for the application to account for the extra footprint needed by the new driver model, and second, the video memory manager may make more memory available to an application on an as-needed-basis.

Neither of these two solutions is completely trouble-free: 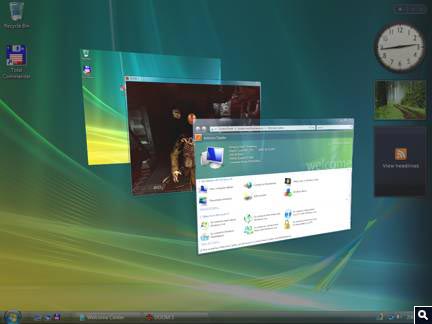